In the early 1970s, the field of neuroradiology was still in its formative years, and among its early practitioners was Dr. John Bentson, at UCLA Medical Center in Los Angeles. As he helped patients with the aid of new technology like the CT scan and computer imaging, he saw an opportunity for innovation. At the time, guidewires were rigid and at worst could injure a blood vessel. Dr. Bentson decided to design a better type.

He conceived of a more supple guidewire that also featured a flexible tip, and after UCLA built an early prototype, other neuroradiologists started using his model. Cook Medical began manufacturing the device in 1973, and it is still in use today, commonly known as the Bentson guidewire. Thousands of patients have benefited from his innovation.

SNIS President, Bill Mack, MD, commented on the loss of Dr. Benston saying, “We have lost a true visionary pioneer in neurointervention. I worked with him at UCLA in his later years. Incredibly smart physician who was the king of the one line neuroradiology reads with never a hedge. ‘This is a meningioma.’ His succinct diagnoses proved to be informative and correct. He will be missed but his contributions to our field will live on.”

SNIS Past President, Gary Duckwiler, MD, FSNIS, remembers, “For me, he was a mentor and taught me cerebral angiography and diagnostic neuroradiology. His technical skills were superb and when working with him, it was sometimes daunting to try and not lose face. His imaging skills and font of knowledge were also unbelievable, and it was amazing to see him come up with diagnoses where others were stumped. Once, while working with him, I had discussed the Bentson wire. Cook Medical was always looking at ways to improve devices and John was not satisfied with the wires available at that time. He wanted a wire that you could shape/curve and that would be soft on the vessels and would be compatible with the catheters he used at the time. Those catheters were made in-house at UCLA by one of the techs from very flexible raw catheter tubing, connectors, with the catheter shapes (JB1, JB2 and JB3) heat-shaped over mandrills, heat-rounded at the tip for a smooth, atraumatic end, and flared at the other end to allow connector hubs to be attached. In those early days, making your own devices was standard. These catheters were very soft, and their shapes could be straightened out by the standard and stiffer wires. He, along with the Cook engineers, designed the Bentson wire, which remains an integral part of our standard angio pack today.”

Gary continues, “John was also a great sportsman: skier, cyclist, sailor and windsurfer. Many times, we windsurfed together. He always pushed the limit as any pioneer would. We separately shared the experience of getting into trouble far offshore, and luckily getting picked up by a boat that happened to be in the right place at the right time for both of us. I guess that he taught me much more than I realized.”

Dr. Bentson joined the UCLA Medical Center in 1969, and he became the chief of its neuroradiology department in 1971. He held the position for three decades until he stepped down in 2002 but continued to work at the hospital before retiring in 2014.

Dr. Bentson did not trademark the device named after him and never profited much. He harbored no regrets though, said his daughter, and he was glad to know that his device continued to help people. A few years ago, she ran into someone who works for Cook Medical.

“My dad invented that guidewire you sell,” she said.

“Your dad is John Bentson?” he replied.

The company soon sent Dr. Bentson a surprise package: a glass display containing a coiled Bentson guidewire along with an inscription thanking him for his contributions to neuroradiology.

Dr. Bentson died at 83 on December 28 at a hospital in Los Angeles. The cause was complications of Covid-19. 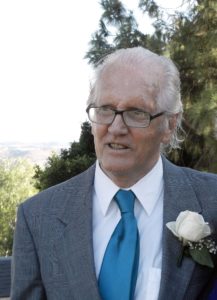