What is an aneurysm?

An aneurysm is an abnormal, weak spot on a blood vessel wall that causes an outward bulging, likened to a bubble. These weak spots can involve all walls of the blood vessel (a fusiform aneurysm), form a bulge on just one wall (saccular) or separate the vessel walls (dissecting). An aneurysm can affect any vessel in the body but only those in the head can cause a hemorrhagic stroke, a serious medical condition, when they rupture which can lead to brain damage and death.

Aneurysms are an uncommon disorder of the blood vessels that affects approximately six percent of the United States population. In total, approximately 30,000 aneurysm ruptures (known as intracranial hemorrhages) occur each year. On average, aneurysms are more common in females than in males, and 20 percent of patients suffer multiple (two or more) aneurysms. The average age of individuals affected by aneurysms is 40-60 years old, and the most significant risk factors are cigarette smoking and family history of aneurysms.

How are aneurysms diagnosed?

Unfortunately, most aneurysms are not detected until they have already ruptured. Occasionally, large aneurysms can present with symptoms – such as vision changes, pain above and behind the eye, nerve paralysis, localized headache, neck pain, nausea and vomiting – that alert one to a potential problem and lead to a consult with a doctor. Of these patients, an increasing number of aneurysms are being found pre-rupture because physicians perform scans including CTs (computed tomography) and MRIs(magnetic resonance imaging) to assess patients with these complaints.

While CT and MRI scans can show many aneurysms, most patients will undergo a cerebral angiogram for definitive diagnosis and to determine the best treatment option. An angiogram is an invasive procedure in which a catheter (resembling a flexible tube) is inserted into the groin and guided up through the vessels to the site of the aneurysm. A liquid dye or contrast agent is injected into the vessel so that highly detailed pictures can be taken, revealing the location, size and shape of the aneurysm. This precise information is then used to determine the best treatment option for the patient.

What happens when an aneurysm ruptures?

When an aneurysm ruptures, it bleeds into the spaces around the brain (known as a subarachnoid hemorrhage) causing a severe headache, classically described as “the worst headache of my life!” Other symptoms can include nausea, vomiting, lethargy and loss of consciousness. A subarachnoid hemorrhage is a medical emergency and 10 to 20 percent of patients will die before getting to the hospital. Another 40 – 50 percent of patients will die in the next 30 days and half of those patients that survive remain dependent on others for normal activities of daily living.

Patients who have suffered a subarachnoid hemorrhage can spend up to two weeks in an intensive care unit (ICU), as they may experience complications from blood being present in the subarachnoid space. Hydrocephalus is swelling of the fluid spaces of the brain and may require a drainage tube to relieve the pressure. After about four days, the blood breaks down into its constituent products and can become irritating to the blood vessels causing a condition known as vasospasm, which is a narrowing of the blood vessels that may cause decreased blood flow to the brain, resulting in a stroke. Sometimes this can be prevented by medications or treated by increasing the blood pressure to overcome the narrowing. If these measures fail, more aggressive treatments such as injecting medications directly into the blood vessels of the brain or using a balloon to open the vessels may be necessary.

How are aneurysms treated?

Surgical treatment (clipping). The traditional “open clipping” is performed by a neurosurgeon and involves actually opening the skull in order to place a clip across the aneurysm where it arises from the blood vessel. This prevents blood flow from entering the aneurysm, which keeps it from bursting. Most elective patients will spend one to three nights in the intensive care unit and then will go home on light restricted activity.

Endovascular treatment (coiling, ballon or stent assisted coiling, flow diverters). An endovascular procedure is performed by a neurointerventionalist, who may be a neurosurgeon, neurologist, or radiologist by training. The procedure is usually performed as an extension of the angiogram where a catheter is inserted into the groin and navigated through the blood vessels to the brain. The main endovascular treatment option has been “coiling” for about 20 years, but more recently “flow diverter” devices have also become available. The appropriate treatment modality may depend on the size, location, anatomy, clinical symptoms and other factors.

Coiling. The operator will use the catheter to deliver and place platinum coils in the aneurysm, filling the bulge up to the spot where it arises from the blood vessel. These mesh wires prevent blood flow from entering the aneurysm and thereby reduces the pressure that would otherwise cause it to burst. Most elective patients will spend a night in the hospital and then will go home with minimal restricted activity.

When performing a coiling procedure, physicians may utilize additional devices, such as a stent or a balloon, to help keep the coils in place. Stent-assisted coiling involves permanently placing a stent in the vessel adjacent to the aneurysm to provide a scaffolding of support that keeps the coils within the aneurysm sac. Balloon remodeling involves temporarily placing a removable balloon adjacent to the aneurysm while coils are positioned in the aneurysm. Occasionally, it is necessary to add more coils at a later time to complete treatment. 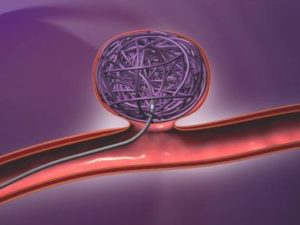 Aneurysm Coiling with a Bioactive Coil 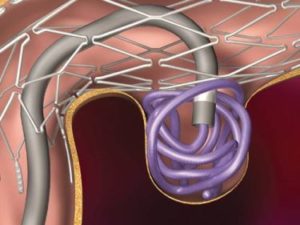 Flow diverters. New devices, called “flow diverters,” have recently become available for treatment of certain aneurysms. These devices are similar to stents, but are more tightly woven, and as such, their mesh holes are much smaller than conventional stents. They are designed to divert blood flow away from the aneurysm sack, and exclude it from the natural circulation of blood. Flow diverters have been shown to “remodel” the parent vessel, and are able to restore the natural course of the artery. They serve as flexible, supportive scaffolding to reconstruct the parent artery, which contains the aneurysm. Placement of the device markedly reduces the flow into the aneurysm, which over time results in thrombosis and elimination of the lesion.